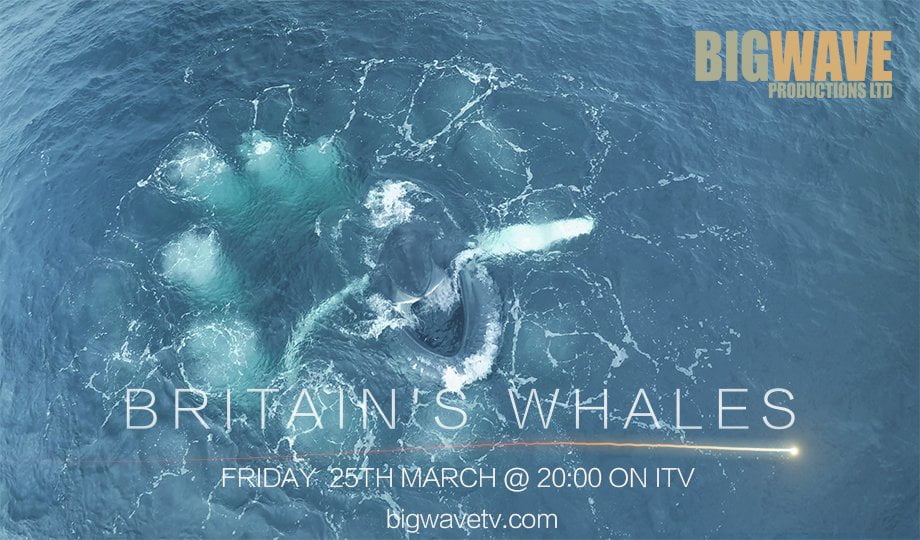 Humpback whales filmed off the south coast of Ireland last year will feature prominently in a new wildlife documentary to air on UK TV network ITV this coming Good Friday (25/03/2016) at 8pm.

The film crew captured spectacular drone footage of humpback whales bubble-net feeding off The Blasket Islands in Co. Kerry in September 2015. Presenter Ben Fogle was with Irish Whale and Dolphin Group (IWDG) sightings coordinator Padraig Whooley aboard the Blasket Island Marine Tours vessel out of Ventry, Co. Kerry when they encountered the whales.

While the choice of title is perhaps unfortunate, given that much of the striking cetacean footage was filmed off the coast of Ireland, the programme will hopefully clear up any geographical confusion in the narration. It promises to be a fabulous showcase of the cetacean activity we’re lucky to enjoy off the Irish south coast.

“This ocean is alive, it’s just incredible here in the British Isles,” says Ben on the film. “We’ve got dolphins pushing all of the bait together; we’ve all of the birds feeding in a great frenzy above, and we’ve got these magnificent humpback whales coming up and joining in the feast.”

The video preview below shows a brief sample of some of the aerial footage… although the best has no doubt been saved for the programme itself (see the still image above).

The first programme, “Britain’s Whales” is followed by a second, “Britain’s Sharks” (ITV, 9pm, Friday 25/03/2016), where presenters Ben Fogle and Ellie Harrison look at sharks around the British Isles. It includes coverage of the UK’s first ever “whale fall” expedition. The carcass of an unfortunate humpback drowned in fishing gear off the Scottish coast is transported to the Celtic Deep, a deep water area of the Celtic sea between Ireland, Wales and Cornwall, and allowed to drift, attracting other denizens of the deep in to feed.

“The dream would be if we got some sharks. That’s not to say I’m not anxious and nervous about the whole thing, particularly diving in very deep waters with British Sharks” Ellie says before the presenters encounter the largest gathering of sharks ever seen in these waters.

Tune in to ITV 1 on Friday from 8pm for some spectacular marine wildlife around British AND Irish coasts.