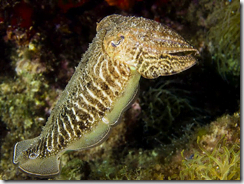 The common or European cuttlefish is one of the most amazing creatures living in the seas around Ireland. Favouring the warmer conditions found around our south west, south and south east coasts this close relative of the squid and octopus belongs to an advanced group of molluscs known as cephalopods – widely regarded as the most intelligent and active group of invertebrates on earth.

Cuttlefish take their name from an internal shell, known as a cuttlebone. This “shell” consists of an elongated oval of calcium carbonate divided into tiny chambers that the cuttlefish can fill or empty of gas to control its buoyancy. These cuttlebones can sometimes be found washed up on the beach, and are the same “cuttlebones” sold in pet shops as a mineral supplement for pet birds.

The body of a cuttlefish consists of the mantle, head, arms and tentacles. The mantle is the name given to the sack-like part of the body that contains the cuttlebone, reproductive and digestive organs. This mantle is skirted by a pair of flat, undulating fins – one on each side – that span its entire length. The head is located at the base of the mantle, and is flanked by two large, well developed eyes. At the centre of the head are the beak-like jaws, which are encircled by eight sucker-bearing arms and two long tentacles with paddle-like, sucker bearing tips. These tentacles can be retracted completely into the body, and shot out at speed to ensnare the cuttlefish’s prey.

Cuttlefish have a typical maximum mantle length of about 45cm (18 inches) – although one individual has been recorded with a 60cm (23 inch) mantle. Their colouring is highly variable – although they generally appear as a mottled black or brown. However, like other cephalopods the cuttlefish can change both the colour and texture of its skin at will by expanding and contracting small pigment filled structures within it.

This ability allow the cuttlefish to blend perfectly with its surroundings, providing marvellous camouflage from predators and allowing it to get close to its prey – but colour also plays a crucial role in cuttlefish communication, particularly during spawning.

The scientific name of the cuttlefish – Sepia – refers to a type of ink that it releases into the water when alarmed. This effectively provides a smokescreen, confusing predators and allowing the cuttlefish to makes good its escape.

Cuttlefish normally swim slowly through the water by undulating the long fins that run down each side of the mantle. However, when attacking prey or escaping from predators they are capable of incredible bursts of speed by propelling a jet of water from their mantle cavity.

Like all cephalopods cuttlefish are active predator, stalking and catching crustaceans like crabs and prawns and occasionally taking small fish like sand eels. They catch prey by stalking it until it is in range, shooting out the pair of long, sucker-tipped tentacles and pulling the animal back into its eight powerful arms. These in turn manipulate it back towards the waiting beak and rasping tongue-like radula.

Cuttlefish are generally found some distance from the coast in water up to a depth of about 200 metres (c.650 foot). However, in spring and summer they move into shallower water to spawn. Males perform a spectacular display to attract females, with alternating bands of colour passing in waves down the body. Fighting over females is also common at these times. Females lay clumps of eggs attached to shells and weed anchored to the sea floor. Once they have spawned the adults stop feeding and soon afterwards they die.

Young cuttlefish hatch after about three months as fully-formed miniatures of the adults. They are immediately self sufficient and begin hunting small crustaceans among the weeds and rocks on the sea bed. Cuttlefish mature at between 14-18 months of age and have an average lifespan of from 1-3 years.