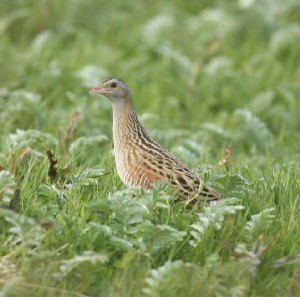 Conservation efforts to save the corncrake from extinction in Ireland appear to be paying dividends. Authorities reported a significant increase in the number of calling male birds during their 2014 corncrake population census, up to 230 from 185 birds recorded last year.

The largest concentration of corncrakes was in Donegal, where 156 calling males were recorded, 108 of them on the county’s offshore islands. Other corncrake hotspots included Mayo, The Mullet Peninsula and islands off the Connemara coast. Only a single calling male was recorded in former corncrake stronghold the Shannon Callows this year.

The corncrake is red-listed in Ireland due to severe declines in the breeding population, chiefly attributed to habitat depletion through modern intensive farming practices. It is the only Irish breeding bird on a list of 24 European species considered to be under global threat of extinction.

Find out more about the corncrake conservation measures in Ireland on the Birdwatch Ireland website.