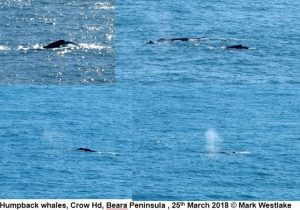 Ireland’s wild south coast scored a “double whammy” in the marine megafauna stakes over the last week, with records of the first basking sharks and humpback whales of the 2018 season off the coasts of Kerry and West Cork respectively.

According to the Irish Whale and Dolphin Group, which coordinates sightings of whales, dolphins and basking sharks around the Irish coast, the first basking shark of the year was spotted by Niamh McSweeney from Slea Head, County Kerry on Monday 19 March. Less than a week later, on Sunday 25 March, 3 humpback whales were photographed from shore by Mark Westlake off Crow Head on the Beara Peninsula in West Cork. 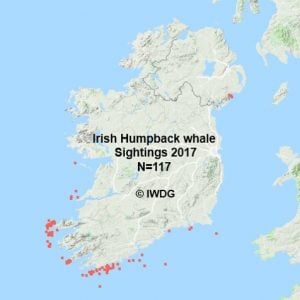 Interestingly humpback whales sightings in Ireland appear to be heavily concentrated around the south coast, and according to IWDG sightings data these most charismatic of the great whales seem to be showing up earlier each year.

IWDG records for initial humpback sightings over the last five years are:

So humpbacks appear to be arriving earlier to the Irish south coast… but they may not be staying here any longer, he cautions.

“In recent years anyway, there hasn’t been the big late-season finalé of large whales that we’d become accustomed to throughout the 2000’s, between October and November. So it may well be that they are arriving earlier and leaving earlier.”

Be that as it may, all of the evidence points to the fact that Ireland’s wild south coast is one of the best places in Europe to see some of the world’s most spectacular marine megafauna, and the time to get out there and look for them is right now!

NB: If you spot any whales, dolphins or basking sharks off the Irish coast over the spring, summer and autumn please report all sightings to the IWDG through their easy-to-use online sighting form.