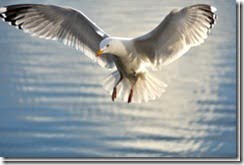 Researchers in the USA believe that the ungainly practice of “flap-running” employed by many birds as they climb a steep incline could represent a key step in the evolution of flight.

Biologists at The University of Montana’s “Flight Lab” conducted a series of experiments with domestic pigeons. The study, published in the Journal of Experimental Biology, shows how flapping helps birds to ascend steep inclines using a fraction of the energy needed for full flight, and suggest that early flightless birds probably employed a similar technique.

The scientists wanted to find out why birds would choose to flap-run up a slope when they are capable of full flight. Dr Brandon Jackson, who led the team and co-researcher, Dr Ken Dial, first noticed the behaviour when filming a type of partridge known as a chuckar, which would routinely “flap-run” over obstacles and even up cliff faces in preference to flying.

Measuring the amount of energy used in the flight muscles of pigeons Dr Jackson and his team demonstrated that on a 65 degree incline flap-running demanded only 10% of power from the birds’ flight muscles compared to full flight.

“The signal was imperceptible at first, and we actually thought we had a problem with the recording equipment,” said Dr Jackson. “But when we zoomed in, there it was, about a tenth the magnitude that it was during flight. The birds seemed to be using hardly any power to flap their wings as they ran up the slopes.”

The method is also an essential learning step for fledging chicks say the researchers, allowing young birds with underdeveloped flight muscles to get off the ground and away from some predators.