You are here: Home / Wild Blog / Conservation / Raptors in the firing line on national radio show 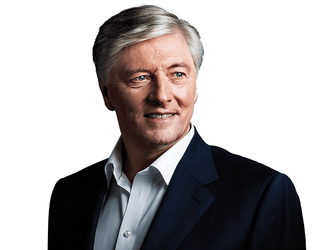 On the show, host Pat Kenny (pictured left) introduced Biochemistry Professor, Luke O’Niell (yes, you read that right — a professor of biochemistry), about the massive decline in bird numbers. The thirteen minutes or so of discussion that followed was little short of horrific, with raptors (defined on the show as “those horrible birds of prey”), crows and magpies all copping the blame for the global decline in small bird numbers.

The dynamic duo go on to suggest that protecting birds of prey is a bad thing (wrong), that the rising number of red kites in Ireland are a menace as they attack and eat smaller birds (wrong) and decry the fact that the general public are not allowed to take “pot shots” at magpies and crows. I could go on and on, but I really couldn’t hope to do the piece justice… so you’re much better off listening to it yourself and drawing your own conclusions.

It’s peppered with errors and misguided conclusions based on anything but solid science.

It’s not just a question of making silly mistakes either — painting raptors as villains in the story of small bird decline is potentially damaging, not just in terms of raptor persecution, but also to the broader public perception of wildlife conservation in this country. And let’s face it, we already have a woeful track record in the area.

To be fair, Professor O’Neill did issue a public apology last night on twitter in response to @WildIreland, but as I pointed out, most listeners won’t see it on Twitter, and it doesn’t go nearly far enough.

@WildIreland let me rephrase as even got that wrong! Bad day…apologies to all those who tweeted re the errors today. — Luke O’Neill (@laoneill111) January 14, 2015

I feel that this demands a much more comprehensive retraction of these erroneous statements, as do the team over at Birdwatch Ireland, who posted this on their Facebook page this morning:

If, after listening to the piece you feel the same way, then I’d encourage you to take a few minutes to email the show on [email protected] or send a tweet to @PatKennyNT and @NewstalkFM demanding an on-air apology and full retraction to help put things right.

Update: See this post on the issue from the Raptor Persecution Scotland blog, including an email to Professor O’Neill from Dr. Allan Mee, who leads the white-tailed eagle reintroduction project with the Golden Eagle Trust.

Update: For the REAL science-based facts see this response on the Ecology & Evolution blog of the School of Natural Sciences, Trinity College Dublin, including an unreserved apology from Professor O’Neill.