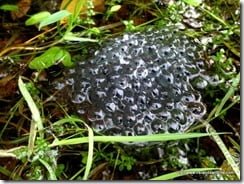 Spring, it seems, has come early to Ireland this year. On Saturday the 07 of January I spotted a clump of frogspawn in a roadside ditch beside a small lake not far from the house.

Common Frogs normally emerge from hibernation around the middle of February — but this year it seems the abnormally mild weather has our amphibian friends stirring from their winter slumber much earlier than usual. I normally start seeing spawn around locally from late Feb onwards. So the first week in January is exceptional… and I’m not convinced that’s a good thing for the frogs.

It’s not an isolated incident either – on the Ireland’s Wildlife community page on Facebook people have pointed out frog spawn sightings from before Christmas in various locations around the country.

A hard frost over the next few weeks – which is entirely possible, of course —  will destroy any spawn already laid… essentially rendering the reproductive year null and void for those frogs (and any other amphibians) that have decided on an early start to the breeding season. If that happens it could have a significant impact on the frog population. Of course some frogs will breed later in the spring, and their spawn will develop normally… but with less adults breeding successfully, and naturally high mortality rates for spawn, tadpoles and froglets the prognosis can’t be good for a species that’s already in decline.

And it’s not just frogs… there are reports of bees and butterflies on the wing around the country, plants are pushing up their tender young shoots, trees are budding ahead of time, birds pairing up and checking out nest sites, and even flowers blooming. Everything seems to be happening  before it should.

On the surface all this mild weather might seem like a good thing. After all, who wouldn’t welcome an early spring… right? But for wildlife kicking into gear too early could have serious consequences if the weather takes a turn for the worse. The truth is we’re still in the middle of winter and it could get a lot colder very quickly. Natural systems have built in tolerances that allow them to bounce back from fluctuations in the climate… but there are limits. Let’s hope that the mild weather holds and that this early “spring” gives our wildlife a head-start, rather than a false start!