You are here: Home / Wild Blog / Wildlife Surveys / Hop to it: report your Irish frog sightings 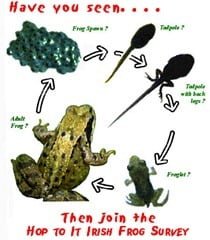 To mark World Wetlands Day on Thursday the 2 February the Irish Peatland Conservation Council (IPCC) is launching its annual ‘Hop To It Frog Survey’.  The survey helps the IPCC to map the distribution and habitat preferences of the Common Frog (Rana temporaria), Ireland’s most widespread and familiar amphibian species.

To do that they need help… and they’re calling on local wildlife enthusiasts from across the country all over country to send in records of their frog spawn, tadpoles, froglets and adult frogs.

One of the best places to start searching for frogs, says the IPCC, is in garden ponds.

“This man-made habitat will probably become increasingly important in future years, as the natural and wild habitats of the frog are lost to drainage and development,” said the organisation.

February and March are the peak times for frog spawning, although spawning can occur in January or even earlier in the south of the country if the temperature is mild enough, as has already been happening this year.

Since the first Hop To It frog survey in 1997, the IPCC has received more than 4,200 records. Although frogs are in decline worldwide, due to factors like habitat destruction, pollution and infectious disease, the results of the survey to date show that the Common Frog is widespread throughout the island of Ireland with 40% of records occurring in garden ponds.

The survey team is particularly keen to get frog records from counties that have been poorly represented in previous years: the six counties of Northern Ireland, Laois, Carlow and Leitrim.

The IPCC stresses that monitoring frog populations in this way is vital, and describes frogs as “barometers of environmental health” in wetland habitats. To check out where frogs have been found in your county before, or to download your survey card visit www.ipcc.ie or you can get them directly from the IPCC, Bog of Allen Nature Centre, Lullymore, Rathangan, Co. Kildare, Tel 045-860133