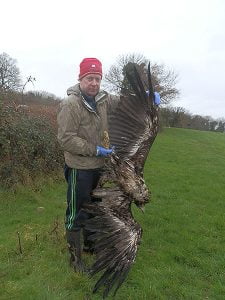 One of the first two white-tailed eagles to hatch in Ireland in more than a century has been found shot dead in Co. Tipperary.

The male bird was one of two chicks reared successfully by a pair of re-introduced eagles at a nest site on Lough Derg near Mountshannon in Co. Clare last summer. It was discovered on land near Ballinderry, North Tipperary by a National Parks and Wildlife Service (NPWS) officer and Dr Allan Mee,  the Golden Eagle Trust’s White-Tailed Eagle Reintroduction Project Manager after receiving a tip-off from a member of the public.

A post-mortem at the Regional Veterinary Laboratory at Knockalisheen revealed that the bird had died from a shotgun wound, which broke one of its legs and a wing. An x-ray showed some 40-50 shotgun pellets in the carcass. Reports indicate that the injured bird slowly starved to death over a period of several weeks, unable to forage and feed due to its horrific injuries.

The shooting has come as a severe blow to all involved in the reintroduction of these iconic birds to Ireland’s skies.

“I am shocked by this crime. The birth of this bird was a special day for nature conservation in Ireland,” said Minister for Arts, Heritage and the Gaeltacht, Jimmy Deenihan. “So much work has gone into reintroducing this species here, and there has been wonderful cooperation by many different groups to achieve successful breeding. To have all this undone is a significant blow.

“Eagles are protected by law. I would urge anyone with information to contact An Garda Siochána or my department’s staff in the area.” 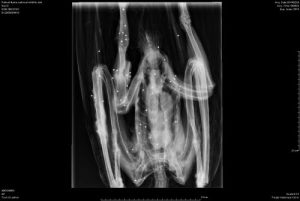 “Finding one of the first two young White-tailed Eagles to fly from a nest in Ireland shot dead is heart-breaking,” said Dr. Allan Mee, who coordinates the reintroduction programme. “It is absolutely incomprehensible that someone would shoot one of these magnificent birds, but even more shocking is that one of the first two Irish-bred eagles has been shot only 7 months after leaving the nest.

“Although all losses impact the project, for me the loss of this male, the first Irish-bred White-tailed Eagle of the reintroduction programme, is especially difficult to take,” he added. “This bird and its sibling were the hope for the future of the species in Ireland. Many people spent months closely watching this bird’s progress until it flew from the nest near Mountshannon last year. I feel gutted for these people as well as the bird. Let’s hope its sibling and the other chicks to fly from nests in Ireland in 2014 will see a better fate. Ultimately it is up to ourselves to make this happen by cherishing the wonderful wildlife we do have, including eagles, and their habitats.”

It is a criminal offence under the Wildlife Act (1976) to shoot or otherwise harm white-tailed eagles, and officers of both the NPWS and An Garda Siochána are currently investigating the shooting. Anyone with information on this crime should contact the authorities in confidence: An Garda Siochána 067-50450 or the National Parks and Wildlife Service 076-1002501.