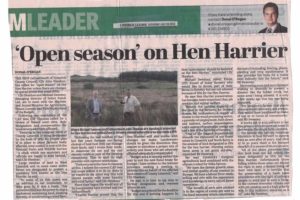 I’m at a loss to understand what Cllr. John Sheahan could have been thinking when he made his “Open Season” on hen harriers statement (as reported in the Limerick Leader and outlined on this site here).

I felt compelled (along with many other people I’m sure) to write to Cllr. Sheahan expressing my thoughts on his frankly outrageous statement. You’ll find the full text of my email below.

I will of course publish any response I receive from Cllr. Sheahan as an addendum to this post.

It was with some disbelief that I read about your recent comments in relation to the hen harrier. At first I thought it was a very poor joke. I found it hard to believe a serving public representative would go on record with a statement so blatantly outrageous.

It seems however I may have overestimated the calibre of public representatives in some parts of the country. Your apparent advocacy of an “open season” on hen harriers is bewildering.

I’ll give you the benefit of the doubt and assume that your intention was not to encourage people to go out and shoot hen harriers (that would be both morally reprehensible and quite probably illegal). But you occupy a position of some authority, and with that comes a modicum of responsibility. What you say carries weight and influence… and it doesn’t take a huge leap of imagination to see that some frustrated people will latch on to your statement as vindication to heap yet more misery on an already beleaguered species.

Hen harriers remain in dire straits, here in Ireland and in the UK, thanks to decades of persecution and inappropriate land use. People put the hen harrier in its current predicament, and if anything existing conservation measures do not go far enough to redress the balance. Your demands that those same conservation measures be slackened shows an astonishingly sparse understanding of the underlying issues.

As you are fully aware, hen harriers are a species of high conservation concern here in Ireland and are protected under national and international legislation. Any suggestion that people should intentionally harm the birds is tantamount to an incitement to commit crime. That’s inexcusable from anyone, but is utterly reprehensible from an elected politician.

I live in a rural Irish community and fully understand the needs of farmers and other landowners to generate revenue from their land. I support initiatives that allow them to do so — but with appropriate consideration for wildlife that not only shares that land, but occupied it long before the farmers, or even the farms, arrived. Hen harrier SPAs don’t categorically prevent landowners from exploring a range of development options — but they do ensure that development only happens within certain constraints with due consideration for the incumbent wildlife. That’s as it should be.

We all rely on our environment for our health and well-being… even, at the risk of sounding overly dramatic, for our survival. We have a duty of care to maintain it for future generations, and to restore it wherever we can to a healthier state. Maintaining the biodiversity that supports a functioning ecosystem is part and parcel of that responsibility — and yes, that includes the hen-harrier.

I sincerely hope that the Government Ministers copied on this email, and the Limerick County Manager, will look into this matter with some urgency, and will take whatever measures they feel are appropriate under the circumstances. Meanwhile I urge you to issue a public retraction of the statement and an unambiguous apology that will go at least some way to mitigate the potential damage you may have caused.

NB. A copy of this email will be published on the blog at www.irelandswildlife.com, along with any response I receive.
—
Calvin Jones
Founder and Managing Editor, Ireland’s Wildlife