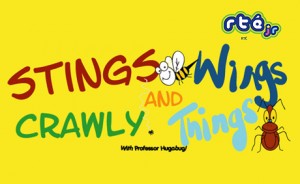 A new radio show introducing Irish children to the wonderful world of invertebrates debuts on RTÉ Jr Radio on Saturday 08 February at 11am.

Stings, Wings & Crawly Things is a 12 part series for children aged 4-7 years that explores fascinating facts about Irish insects, spiders and all manner of winged and crawly creatures. Presented by a knowledgeable ground beetle called Professor Hugabug, ably assisted by Wincy the money spider and Barney the bee, each week the show reveals interesting facts, buzzwords, and tips for getting a closer look at each minibeast.

It also recommends useful online resources to help children discover all about the world of insects via the “Wincy’s web” slot, and offers a catchy rhyme to help children remember all the creatures mentioned!

Stings, Wings and Crawly Things is Produced by All Points West Radio Productions, an independent radio production company based in County Sligo, co founded by Jho Harris and Sinéad McClure (who presents the popular Calendar Road podcast). In this series Jho and Sinéad lend their voices to a range of curious characters from dragonflies to ants. Zach and Ben Harris (Jho’s nephews) add to the pool of voice talent, introducing various elements of the show.

Stings, Wings and Crawly Things focuses on the world of Irish invertebrates and its often unnoticed treasures. From tiny aphids to water-boatman and everything in between, it’s a fun-filled fact-file of Ireland’s eclectic mix of  bugs delivered in an imaginative, informative and entertaining way.

The series was devised and written by Sinead McClure and edited by Jho Harris,  and produced exclusively for Rte Jr Radio with funding from the Broadcasting Authority of Ireland through the Television Licence Fee.

Here’s a brief excerpt to whet your appetite (in which Ireland’s Wildlife gets a mention on “Wincy’s web”).

Tune in to RTE Jr Radio on Saturday at 11am to hear more on DAB, on the RTE Jr website, on Saorview or on channel 942 on UPC.