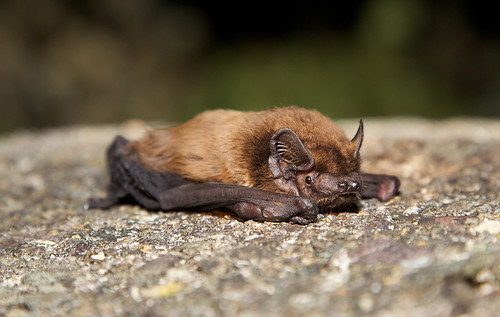 Leisler’s bats are considered rare throughout their European range, except here in Ireland, where the species is common and widespread. The Irish Leisler’s bat population is the biggest in Europe, and Ireland is a significant European stronghold for this, our largest bat species.

Although it is our biggest bat, Leisler’s Bat is still quite small, with an average body length of 50-70mm (c. 2-2.75 inches), a wingspan of 260-320mm (c. 10-12 inches) and weighing between 11-20g (about 0.5oz). The fur on their body is short, thick and generally a dark gold colour: redder on the back and more yellow on the belly. The face ears and wing membranes are dark brown to black.

Bats are the only true flying mammals, and like other Irish bats, Leisler’s bat is nocturnal. However it does emerge earlier in the evening than most other species, and can often be seen on the wing as the sun is setting. Summer roosts are usually situated in hollow trees or in the attic spaces of buildings. Leisler’s bats may travel up to 10KM (c. 6 Miles) from their roost to feed. Like all other Irish bats Leisler’s bat uses echolocation to negotiate its way through the darkness, avoid obstacles and pinpoint its flying insect prey. It emits bursts of ultrasonic sound, and listens for the echoes bouncing back from objects around it. These echoes allow them to build a sonic picture of the world around them and to navigate with precision even in complete darkness. Leisler’s bats produce echolocation calls with frequencies of 18-45 Khz.

The long elongated wings of the Leisler’s bat are ideally suited to high-speed flight and they feed mainly over open areas of land or water. They can sometimes be seen wheeling in to pick off moths and other flying insects that gather around the glow of illuminated street lights.

From late summer to early autumn male Leisler’s bats establish mating roosts. The males defend their roost sites against other males, and fly around calling for females to join them. A single male may assemble a harem of up to nine females and mate with all of them, but fertilisation is delayed until the following spring.

Leisler’s bats hibernate from September to early April in hollow trees or crevices in walls and buildings. The bats have been known to travel over 50KM (31 miles) to find just the right spot for hibernation. The following summer maternity roosts, usually consisting of 20-50 pregnant females, but sometimes reaching up to 100 females, are formed. Each female will give birth to a single baby from about mid June and the young bats are weaned after 7-8 weeks.

Like all bat species, Leisler’s bat is sensitive to environmental change and bat populations in general are good indicators of the general ecological health of an area. Bat species worldwide have been in decline since the middle of last century, mainly due to loss of roosting sites through human disturbance, destruction of woodland habitat, and the renovation of old buildings.