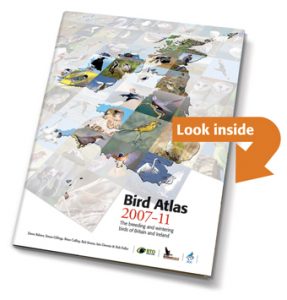 If you’re a birder in Britain or Ireland then chances are you already know about the upcoming publication of “Bird Atlas 2007-2011”.

The culmination of one of the most ambitious citizen science projects ever undertaken, Bird Atlas brings together data on bird populations collected by tens of thousands  of dedicated volunteers across the British Isles. It has been described by Andy Clements, Director of the BTO, as “”The most important British and Irish bird book for two decades”.

Scheduled for publication in October 2013, Birdwatch Ireland — whose dedicated team was instrumental in coordinating and contributing to the Irish component of Bird Atlas, are offering a special pre-publication price of €64 (saving you a whopping 33% on the cover price, with free delivery to anywhere in Ireland) on orders received by 31 July 2013.

Order your copy of Bird Atlas from Birdwatch Ireland today, and be one of the first to receive this seminal work on the current state of Britain and Ireland’s birds.

Check out some sample pages below: