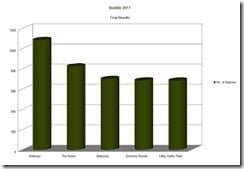 Congratulations to the team from Killarney National Park, who were crowned national BioBlitz champions 2011 over the weekend with an impressive tally of 1,088 species over the 24 hour period despite the inclement weather.

It’s a testament to the skill and dedication of the recorders and volunteers across the country that every site involved surpassed the 542 species tally recorded by last year’s inaugural National BioBlitz champions, Conemarra National Park.