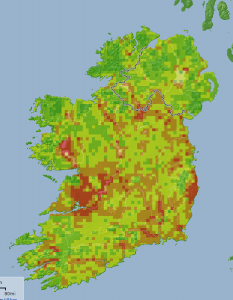 A joint project by Bat Conservation Ireland (BCI) and the Centre for Irish Bat Research (CIBR), the “‘Landscape Conservation for Irish Bats’” initiative stems from the correlation of BCI’s bat records from all over Ireland with knowledge about each bat species’ preferred habitat, and actual conditions on the ground where those species are known to occur.

By exploring criteria like land cover, altitude, climate and other information, and overlaying sightings record data, the scientists could determine crucial information that will feed in to future conservation efforts.

Key outputs of the report include:

Overall the report identified that Ireland has the potential to be bat-friendly, with suitable habitat and roosting sites available throughout the country.

You can download a PDF version of  “Landscape Conservation for Irish Bats” by clicking on the link (opens a PDF document — to download right click and “save as”).

As well as the reports, maps from the study went live on the National Biodiversity Data Centre’s online mapping system, Biodiversity Maps, where the information will be available for consultation by conservation decision makers.