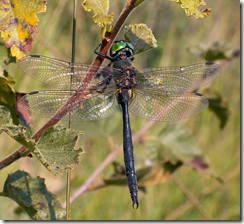 The National Parks and Wildlife Service has updated its International Union for the Conservation of Nature (IUCN) Red List for Irish dragonfly and damselfly species. Published at the end of March this year the revised list reveals that 17% of our Irish dragonfly and damselfly species are threatened with extinction, with those from wetland habitats being the most vulnerable.

Our rarest dragonfly is the Northern Emerald (Somatochlora arctica), which is  classified as Endangered – with estimates putting the population at fewer than 1,000 adults, restricted to two small areas in Killarney National Park. The main threats for the species are continued degradation of the wet-heath habitat it needs, and the potential impact of the invasive Common Rhododendron (Rhododendron ponticum) on its only recorded breeding site.