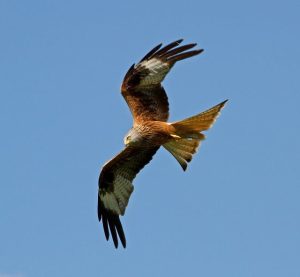 A ninth red kite from the Irish project to reintroduce this magnificent bird of prey has been killed by poisoning .

Tests on the bird, which was found dead near Brittas Bay at the end of last year, have confirmed the cause of death as illegal poisoning. It was a breeding female that had previously nested on a farm near Redcross, Co. Wicklow.

“These birds are specialist scavengers, that’s why they are finding these food sources which are sadly poisoned. They are designed to clean up the countryside,” said Dr Marc Ruddock, manager of the Red Kite reintroduction project, describing the loss as “demoralising”.

The dead Red Kite, identifiable by it’s distinctive coloured wing tags, was one of the first young kites to be released in Ireland in July 2007. She had bred successfully and raised three Irish-born young at the site in Redcross.

Dr Ruddock called on members of the public to pass on any information they have relating to the illegal use of poisons to their local National Parks and Wildlife Service (NPWS) rangers and to gardaí in a bid to identify and prosecute the culprits. Penalties for illegally poisoning birds of prey can be up to €5,000 or 12 years in prison.

Jimmy Deenihan, Minister for Arts, Heritage and the Gaeltacht, issues a warning that irresponsible and illegal use of poison baits could have unpredictable consequences.

“I would appeal to people to act responsibly when it comes to implementing pest control measures,” said the Minister. “They should never be at the cost of causing death to birds of prey and other wildlife. The irresponsible use of poison baits has also killed numerous working dogs and domestic pets, in some cases where families had just taken their dog for a walk in the woods.”

Legal poisons also a danger to vulnerable birds of prey

Meanwhile Birdwatch Ireland is calling on the public to use legal rodenticides more responsibly following a spate of secondary poisonings in the north Dublin area. Eight of the 39 red kites released in Fingal, Co. Dublin have since been found dead, with tests confirming that at least four deaths were due to birds hunting or scavenging rodents dosed with legal poisons.

According to John Lusby, the raptor conservation officer with BirdWatch Ireland, the deaths “highlight an area of serious concern, and recent research has also shown that other species such as barn owls, kestrels and long-eared owls are at significant risk”. He is calling for amendments to current Irish regulations that will promote best practice rodent control.