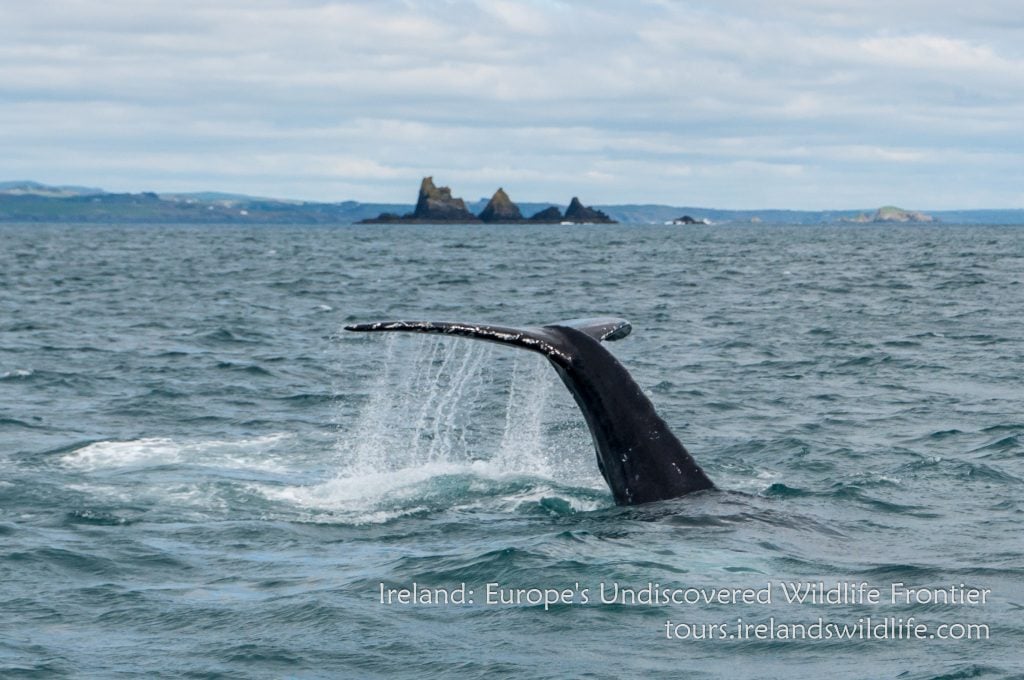 It was a glorious morning on Toe Head in West Cork. The sun was shining, and the April breeze, while still a bit keen, wasn’t at all uncomfortable. At my feet was a stunning vista spanning from Galley Head to the east all the way around to the Fastnet Rock to the West. But I wasn’t here to admire the view… not this morning… this morning I was on a mission.

I scoured the ocean from east to west and back again, looking for tell-tale signs. Congregations of seabirds, stray splashes, unusual shimmers on the surface of the ocean… they all got more than their fair share of scrutiny. Anything, in fact, that could betray the presence of something on or just under the surface… something big. 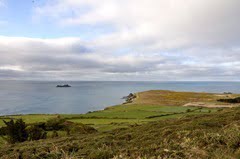 Other people were watching too: from Cloghna Head overlooking Rosscarbery Bay and from Spain Point near Baltimore. This was a coordinated effort and between us we had a vast body of water well and truly covered. Yet our quarry remained elusive.

Elusive is not a word that springs to mind readily when you’re talking about a forty foot long, thirty tonne leviathan… but when they’re slipping through a massive expanse of ocean humpback whales can be surprisingly tricky to pin down. Still, unlike some of the other large whale species that frequent Irish shores, humpbacks typically raise their tail (flukes) out of the water when diving, a behaviour known as fluking. If they were out there, surely one of us would have noticed that. It wasn’t looking good. 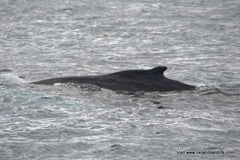 I checked my watch. I’d been scanning the sea for a good hour, with nothing but a couple of harbour porpoise to show for it; it was time to head for the boat. Five more minutes… maybe they’d show. Ten minutes later they hadn’t, and I was late.

I arrived at Reen Pier near Union Hall just in time to clamber aboard the Holly Jo, boat of local whale watching operator Colin Barnes and the platform of choice for this Irish Whale and Dolphin Group (IWDG) research charter. As we slipped out of Castlehaven harbour I’m sure everyone on board was thinking the same thing… would we find them, or would the trip prove fruitless? 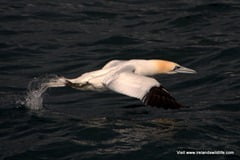 Small numbers of humpbacks typically turn up off the south and east coasts of Ireland during autumn and early winter to feed on the huge congregations of herring. The arrival of two animals off West Cork in early April had the experts flummoxed, and shows just how little we still know about the habits of this most iconic of whales.

As the Holly Jo motored on everyone scanned the horizon with baited breath, fuelled more by hope than expectation. The fact we hadn’t seen whales from land earlier meant we were all resigned to a long day’s searching and the prospect of not finding the humpbacks at all. 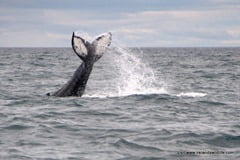 We were less than fifteen minutes from the mouth of the harbour and we’d found the humpbacks — or one of them at least. I rushed to the front of the boat, and there it was again: the characteristic broad, bushy blow of a humpback whale.

Photographs of the flukes soon confirmed that this was the same whale seen off Hook Head, County Wexford in January and February of this year (HBIRL#18). As well as getting valuable photo-ID records of the whale, the IWDG also took a biopsy sample to add to the growing body of genetic and toxin-related data on the Irish humpback population. 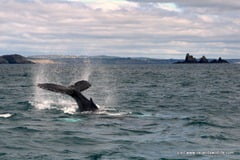 After spending a bit of time with this first whale, and with all of the necessary scientific data recorded, our attention shifted to the second animal. It was nearby and seemed inquisitive. On several occasions it approached the boat of its own accord, surfacing at close quarters, even passing directly underneath us. This was a breathtaking close-encounter, with the whale in control, but those all-important photo ID fluke-shots — one of the main goals of the trip — were proving tricky. The whale simply wasn’t fluking.

Just as we were wondering if we’d ever see the flukes something amazing happened. The whale stood on its head, lifted its tail clear of the water and started a spectacular bout of lob-tailing: slapping the surface repeatedly with a booming sonic “thwack” accompanied by a spectacular splash. It was a truly phenomenal encounter and meant we got some of the best fluke-shots I’ve ever seen. The IWDG soon confirmed this was a brand new addition to the Irish Humpback Whale record. Welcome HBIRL#20 — I hope I see you again soon.