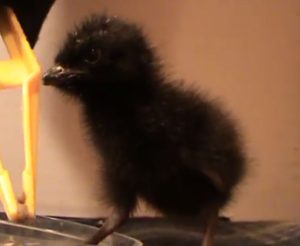 The National Parks and Wildlife Service (NPWS) and the Irish Grey Partridge Trust are working together on an innovative trial to breed the endangered corncrake in captivity for the first time in Ireland. Fota Wildlife Park in Co. Cork is assisting in the experimental captive breeding programme.

A pair of corncrake eggs supplied by Fota Wildlife Park were successfully incubated by the Grey Partridge Conservation Trust team in Offaly earlier this year. The two chicks that hatched are currently being hand-reared with the help of the Trust’s captive breeding manager Paddy Kelly (see video below).

Speaking to journalists Offaly-based NPWS conservation ranger Kieran Buckley described Ireland’s corncrakes as being “on an extinction trajectory”, and said the project was “another tool in our management strategy for the recovery of the species”.

“The chicks are almost like a newborn baby, they need constant attention,” said Mr Buckley. “They feed the birds every hour during the day.”

As the chicks are not bred directly from wild Irish birds these individuals will not be released into the wild, but if the trial is a success the conservation team hopes to take eggs from wild nests in high-risk locations prone to predation, flooding, and other threats. Corncrakes can have two or even three clutches of eggs each breeding season, but often lose a high percentage of eggs and young. By collecting some eggs from vulnerable nests the team hopes to improve overall survival rates and give the beleaguered species a much needed boost.

Formerly an extremely common summer visitor to Ireland, corncrakes have suffered dramatic population declines and are now threatened with global extinction. Today the bird is only present in Ireland in small numbers in the Shannon Callows, north Donegal and western parts of Mayo and Connaught.

While the captive breeding programme may help as part of an overall programme to protect the corncrake, Mr Buckley stresses that larger issues like the availability of suitable nesting habitat need to be tackled to halt the corncrake’s decline.