You are here: Home / Wild Blog / #IWOnTour / Gibbons from the infinity pool #IWOnTour

I’d popped back to the room to get something and was taking my time, enjoying the cool of the air con after the sweltering mid-morning heat of Thailand’s West Coast. Suddenly my youngest burst into the room.

Now there’s a line you don’t hear every day. I grabbed the two pairs of binoculars I have with me on the trip and headed over at a brisk clip.

My wife was pointing up at the forest covering the lower portion of the limestone cliffs that are the Krabi region’s hallmark. Scanning the treetops I could see nothing at first. As is so often the case it was movement that betrayed their presence. 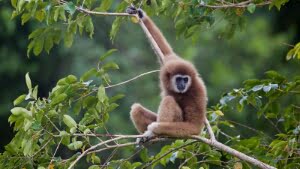 White-handed or Lar gibbons, at least four of them, making their way across, up and over the cliffs, moving fluidly through the canopy with astonishing grace and effortless speed.

We watched breathlessly, sharing the two pairs of binoculars between the five of us. It was an absolute joy to see them, perhaps more so as it was so unexpected.

Nobody mentions gibbons when you come to Railay Beach. They don’t feature in any of the tourist brochures, or the Lonely Planet and aren’t covered by the local interpretive signage that has sections for other primates like the crab-eating macaque and spectacled langur (AKA the dusky leaf monkey).

Perhaps that’s a good thing. I guess too many tourists looking for gibbons would be bad news for the gibbons.

We’d heard the strange whooping calls early that morning from our room. At first I’d thought gibbon… but talked myself into thinking it was some exotic bird species. Surely if there were gibbons in the area somebody would have mentioned it.

I was listening to bird calls on the smartphone, trying to pin down what was making the racket, and getting nowhere. I decided to check gibbon vocalisation… just on the off chance that my initial gut feeling had been the right one, and white-handed gibbon was a perfect match.

We scoured the hillside for movement, hoping to catch movement, or a glimpse of  a furry arm. Nothing.

After what seemed an age we accepted we weren’t going to see them and went for breakfast and a swim.

Then the magic happened.

It’s one of those indelible wildlife moments that will be with me forever, made all the more special through sharing it with my family and the few other people around the pool, who would otherwise have been oblivious to the gibbon’s passing.

It was an unexpected privilege, and another reinforcement of how wildlife can always surprise you.

Do you have an amazing holiday wildlife story to tell? Let us know about it via the comments, post it to our Facebook page, or, better yet, submit it as a story for publication here on Ireland’s Wildlife.