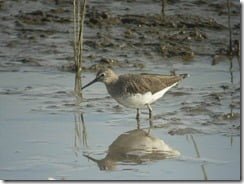 A few weeks ago an osprey making its way south for the winter decided to stop off for a few days at White’s Marsh near Clonakilty. It’s only 15 minutes up the road and the chance of seeing my first osprey in Ireland was too much to miss.

So bright and early one Sunday morning in late August I headed for Clonakilty, and duly bagged me an Irish osprey. Fantastic stuff. There were also plenty of waders strung along the waters’ edge at white’s marsh, and among the reams of black-tailed godwit, redshank and small flock of dunlin and occasional lapwing, there were a few species I needed to take a closer look at.

Two common sandpiper were easy enough to pick out… as were the two juvenile ruff feeding on insects in the marshy grass (lovely looking birds, it has to be said). But a couple of birds were a bit trickier. I knew they were wood sandpiper and / or green sandpiper – but which was which?

They had me poring over the Collins Guide for what seemed like an age before deciding that there really was one of each there. Fantastic!

If only I had seen this great video from the BTO on how to separate these two very similar waders before I’d set out. Check it out if before heading out to a wetland near you… it might just come in handy.

Wood Sandpiper and Green Sandpiper… spot the difference courtesy of the BTO!

The image of the green sandpiper used above is © Copyright Hugh Venables and is licensed for reuse under this Creative Commons Licence.