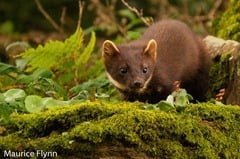 DNA analysis carried out at Waterford Institute of Technology has confirmed unequivocally that a dead pine marten found by the roadside near Newtown in Mid Wales is a native British animal… the first to be recovered in Wales since 1971.

“The significance of this find cannot be overstated,” said Natalie Buttriss, Chief Executive with The Vincent Wildlife Trust (VWT). “It adds to the body of evidence supporting the long-held view of mammal experts that this attractive tree-dwelling animal does exist in Wales, but in such low numbers that very few people ever see one.”

Over the last twenty years the VWT has received more than 300 reports of probable pine marten sightings, and has used them to create a map of potential pine-marten hotspots in Wales. VWT volunteers have been monitoring hotspots for pine marten scats, using remote cameras and baited hair tubes over recent years to try and prove the existence of Welsh pine martens, but evidence has been hard to come by. This the first conclusive proof of pine marten activity in Wales since the discovery and subsequent DNA analysis of a pine marten scat (dropping) from mid-west Wales in 2007.