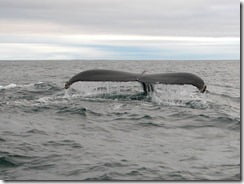 A sizeable influx of fin whales off the coast of West Cork, four different humpback whales of Slea Head in County Kerry, and a rare sighting of a humpback whale near Lambay Island off north Dublin means that large whale season is well under way around our coasts.

There are also reports this week of a rare sei whale spotted in the north east Atlantic off west Scotland. Studying photographs taken from a small plane, leading cetacean experts concluded that the animal was most likely to be a sei whale.

All of this large whale activity in and around Irish waters bodes well for wildlife enthusiasts and budding whale watchers keen to see cetaceans over the coming months, and for the Irish Whale and Dolphin Group’s (IWDG) upcoming national event, Whale Watch Ireland, which is scheduled to take place on Sunday 21 August this year at headlands around the country.