You are here: Home / Wildlife Reviews / Wildlife Books / Book Review: The Wild Plants of Bere, Dursey, Whiddy and other Islands in Bantry Bay 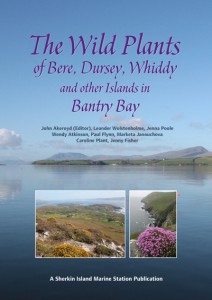 The islands of West Cork, a region I feel privileged to call home, have a reputation for being excellent locations for wild plants.

My life-changing introduction to West Cork was as a volunteer biologist at Sherkin Island Marine Station way back in 1993. I worked on the rocky shore monitoring project — but the Marine Station conducts studies covering a multitude of disciplines, including plants. Every year a visiting botanist catalogues the plant life of the islands and coastline of Roaringwater bay, developing an enviable baseline dataset of regional plant biodiversity spanning four decades.

The results of the Roaringwater Bay plant study were published by Sherkin Island Marine Station in 1996, with a supplement published in 2011 to bring things right up to date. Now, in 2013, the Marine Station has published a complimentary tome, extending the scope of study to the flora of islands in neighbouring Bantry bay.

As with the earlier publications this book has been curated and edited by botanical consultant and conservationist John Akeroyd. It explores the flora of the islands of Bantry Bay, including Bere, Dursey, Whiddy and Garnish, cataloguing an impressive 578 recorded plant species in total, and further illustrating the significance of this extraordinary stretch of coastline for plant biodiversity. Speaking of illustrating… the book is peppered with excellent photography from Sherkin Island Marine Station’s “Photographer in Residence” Robby Murphy, making it a as visually appealing as it is educational.

It begins by introducing us to the islands of Bantry Bay, their environment, history and climate, their geology and of course their vegetation and flora. It also touches on the human story of the islands, particularly issues like land ownership and usage that have had a direct impact on local flora. After this general introduction the book offers a short profile of each of the main islands in turn, complete with photographs, to give the reader a “feel” for each place, and offering notes of particular botanical interest.

The rest of the book consists of a systematic catalogue of all plant species recorded on the islands, with the name  of each species (scientific, English and Irish where available), the habitat where it is typically found, which islands it is found on and details of notable records.

While a book like this is always going to be something of a specialist niche publication, focussing as it does not just on plants, but on the flora of a very discrete chunk of Ireland’s coastline, the book itself is very well put together, and the introduction and island profiles alone offer a fascinating insight into the islands in question for anyone interested in the West Cork region in general, and it’s natural history in particular. The systematic plant list may not make for light reading, but it does represent an invaluable record of the plants you’re likely to encounter when you venture out onto any of the islands in Bantry Bay, which are well worth a visit for both plants and other wildlife. It provides a handy reference for visiting botanists and plant enthusiasts, and documents a valuable baseline of the islands’ species diversity that will hopefully lead to conservationists and planners making more informed decisions about the preservation and development of this unique part of Ireland.

“The Wild Plants of Bere, Dursey, Whiddy and other Islands in  Bantry Bay”, by John Akeroyd (Editor), Leander Wolstenholme, Jenna Poole, Wendy Atkinson, Paul Flynn, Marketa Janauchova, Caroline Plant and Jenny Fisher is published by Sherkin Island Marine Station. You can buy your copy direct from the publisher for €19.99 (plus €3 postage in Ireland or €7.50 worldwide).