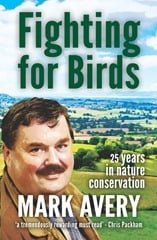 Mark Avery has been fighting for birds for most of his adult life.

As Conservation Director with the Royal Society for the Protection of Birds (RSPB), Europe’s largest conservation NGO, Mark has been at the forefront of some of the most iconic conservation issues to emerge over recent decades. Naturally the book has a UK focus, but the issues Mark tackles – things like rampant forestry expansion, ill-advised development proposals, the huge decline in farmland birds, raptor persecution and many others all echo the plight birds and other wildlife face here in Ireland.

Fighting for Birds charts Mark’s journey in nature conservation, from boyhood outings with his school birding club around Bristol, through early days as a volunteer on RSPB reserves,  to working as a scientist on the ground on RSPB projects and going head-to-head with government ministers on policy issues as RSPB Director of Conservation. It’s a fascinating tale that tells us a lot about the passion, commitment and resolve of a remarkable man.

That in itself would make Fighting for Birds a worthwhile read, but this is a book with more to offer. A lot more….

On the surface it’s a book about Mark Avery: there’s a big picture of him on the front cover, and it looks and feels very autobiographical. Delve into the content though and you soon find that it goes well beyond personal reflection on a fascinating career. The real value of this book is in its subtext, which charts the evolution of nature conservation in the UK over several decades. For anyone interested in nature and its preservation understanding that evolution is pure conservation gold.

At first glance it also looks like a book mainly about birds. It’s true there is a strong bird bias running through the text, and that’s only to be expected, but the conservation issues Mark covers, and the “conservation toolkit” he outlines, apply to all sorts of wildlife. Protecting and managing habitat is never (or almost never) about a single species, or even a single taxonomic group. Conservation almost invariably works in favour of a broad church of plant and animal species, from microbes to macro-fauna. “Fighting for Birds”, more often than not, equates to fighting for wildlife… or even, just to get the buzzword of the moment in, fighting for biodiversity.

Although vociferous enough when he worked for the RSPB, there were naturally some thoughts and opinions that Mark had to keep to himself. Not so in Fighting For Birds. While he doesn’t actively court controversy, this is a remarkably candid book that highlights flaws and weaknesses in conservation policy and practice as well as celebrating successes and lauding strengths. It also shines a not altogether flattering spotlight on some of the barriers that obstruct conservation – from vested interests and industrial lobby groups to the seemingly endless red-tape and bureaucracy of the political system, and perhaps the biggest conservation challenge of all: public indifference and apathy.

Peppered throughout with entertaining and poignant anecdotes, Fighting for Birds brings conservation to life in a way that a dry, text-book style book never could. If you work in nature conservation, or simply love nature and wildlife, buy it and read it. It’s an education!

Thanks to Mark Avery and Pelagic Publishing for submitting “Fighting For Birds” for review on the Ireland’s Wildlife website.