You are here: Home / Featured / Book Review: Secrets of the Irish Landscape 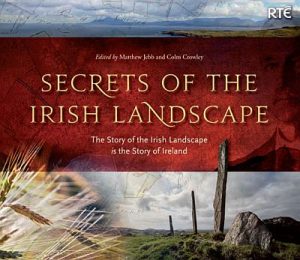 Moulded by incredible geological forces, carved out by millions of tonnes of ice and, comparatively recently, shaped by the equally inexorable influence of man, our landscape is the foundation on which all of our wildlife and biodiversity sits.

“Secrets of the Irish Landscape” is an RTÉ book to accompany the television series of the same name. Published by Cork University Press, it is a large, lavish hardback tome, immaculately finished and presented. There are no two ways about it — it’s a fabulous looking book, one that’s sure to be picked up countless times if you leave it on the coffee table.

In the TV series Derek Mooney follows in the footstep of 19th century botanist, Robert Lloyd Praeger, who travelled the length and breadth of Ireland cataloguing Irish plants and the habitats and landscapes in which they grew — and finding a few surprises that made him ponder the question of how this varied and fascinating flora made the journey to Ireland after the land was scoured clean by the last ice age.

The book, edited by series producer Colm Crowley and director of the National Botanic Gardens in Dublin, Matthew Jebb, explores similar themes — looking at the various landscapes found throughout Ireland, the plants that live their and their origins. Ireland is home to several plant species that don’t occur anywhere else in Northern Europe — plants that are more commonly associated with the Mediterranean, or the Atlantic coasts of Spain and Portugal — growing here alongside species more usually at home in the Arctic tundra. It begs the question why… and what does it mean?

“There are a dozen species of plants in the west and southwest of Ireland that are not found elsewhere in Northern Europe, but only encountered again in Spain and Portugal.” Matthew Jebb

The book charts life’s re-colonisation of Ireland from when the ice receded at the end of the last ice age through to the present day. It explores how the ice sheet re-shaped the landscape, and how the early bacteria and lichen colonised the rocky substrate, ultimately creating the soil that allowed other plants to take hold. It looks at Ireland’s spectacular coastline, the first Irish forests, the arrival of stone age settlers, the special flora found on The Burren, unique Irish landscape features like turloughs, how the potato has had an impact on the Irish landscape, how the landscape shapes Irish identity and much more.

This is the story of Ireland — how it was hewn by millions of tonnes of ice, and how it evolved into the green and vibrant land we know today. It is a story told by a series of experts in dedicated chapters, 24 in all, each eloquently portraying a fascinating topic. There is always a danger, when you bring work together from so many contributors that it won’t “gel”. It’s all too easy to lose the flow and consistency in style and cadence that is as essential to a book’s success as the quality of its content. I haven’t managed to read all of it yet — it’s a fairly hefty volume — but from what I have sampled throughout the book the editors seem to have skilfully avoided the issue. The writing is consistently engaging and informative, style seems relatively consistent from chapter to chapter and the whole book comes together as a very polished whole — so hats off to the editors, the authors and the publishing team on a job very well done.

Augmenting the text — and worthy of consideration in their own right — are superb photographs and illustrations that make the book as much a visual as it is an intellectual feast.

“Secrets of the Irish Landscape” is, in summary, a superb book that documents a fascinating story extremely well. Definitely one that’s well worth a read.

You can buy “Sectrets of the Irish Landscape” at all good bookshops in Ireland, or at the usual assortment of online book retailers. If you buy the book from one of the Amazon.co.uk or Amazon.com links your purchase will help support the Ireland’s Wildlife website.

I’d like to thank the publishers at Cork University Press for submitting “Secret’s Of The Irish Landscape” for review on the Ireland’s Wildlife Website. If you’re a publisher, and have a wildlife and natural history book you’d like to submit for review on the site please get in touch using the contact form.