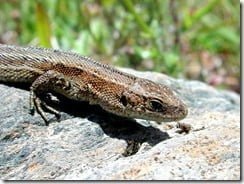 The common lizard, Ireland’s only reptile, can often be seen sunning itself on dry stone walls, rocks or logs during the summer months. These animals occupy a range of habitats, including woodland, marshes, heath, moors, bogs, sand-dunes and even rubbish dumps.

Lizards are active, alert and extremely quick. Their colouration helps them to blend with their surroundings, and they can disappear into a crevice or under a stone with startling speed at the first sign of disturbance.

Common lizards are usually between 10cm and 16cm (4 inches and 6 inches) long, although larger specimens can reach 18cm (7 inches). They have long bodies, short legs and a long, tapering tail. The coarse, dry scales on the lizard’s back can be a variety of colours including grey, brown, copper or green, with a black stripe running down the centre of the back, and a scattering of black spots over the body. Male lizards have orange-yellow bellies with black spots, while females have creamy white bellies usually without spots.

Reptiles, unlike birds and mammals, have no internal temperature regulation system. They rely on the characteristics of their environment and on their patterns of behaviour to control their internal temperature. When they are too cold they bask in the sun, if they get too warm they move into the shade.

Lizards can typically be found basking on sunny days in the morning or the afternoon, but not generally during the middle of the day, when they are in danger of overheating. After cooling overnight, a lizard needs to increase its body temperature to somewhere in the region of 30 degrees Celsius (86 degrees Fahrenheit) before it can hunt effectively. They eat insects, spiders, slugs, snails and earthworms: pouncing on their prey and stunning it by shaking before swallowing it whole.

Because they rely on the sun’s heat to remain active, lizards are forced to hibernate through the Irish winter. They disappear around October and hibernate until the following March, often in groups, occasionally emerging during warmer spells.

After coming out of hibernation in spring male lizards establish a breeding territory and defend it vigorously against other males. Breeding takes place from March to May. Common lizards are viviparous, which means that the young develop within egg membranes inside the female’s body.

After about three months the female lizard will give birth to live, fully developed young that break free of the egg-membranes usually during birth or a few seconds afterwards. Litters consist of 2-12 young born from June to September. Females show no parental care: the young feed actively from birth and quickly disperse.

Lizards can be eaten by larger predators, but as they are active only during the day they rarely encounter nocturnal threats like foxes and badgers. They are taken by birds of prey (they typically form part of the kestrel’s diet), and stoats and mink will kill them if they can catch them. Domestic cats pose a real problem for lizards, especially early in the day before they reach full operating temperature. When they are cold the reptiles are sluggish and are easy prey for an inquisitive feline.

To redress the balance somewhat lizards have an intriguing escape mechanism that allows them to evade predators. If caught by the tail, lizards have the ability to shed the lower portion, leaving a bemused predator with a twitching stump while the lizard makes good its escape. If it survives the encounter the lizard will soon grow a new tail.