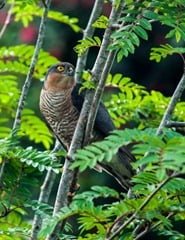 Why is it that we’re so ready to lay the blame at nature’s door when things go awry in the countryside?

There are plenty of examples out there. Bovine TB is perhaps the biggest that springs to mind at the moment. It’s a dreadful disease in cattle that has serious implications for dairy farmers, their families and entire rural communities. It’s a problem that needs to be addressed. So what do we do? We blame badgers!

The decline in songbird populations in our countryside, parks and gardens is another one. Talk to anyone of a certain age and they’ll tell you that there are less birds around than their used to be. Science backs that up — we’ve seen dramatic declines across many of our farmland bird species. But why?

The popular “explanation” you’ll hear on the ground is that our songbird populations have crashed because of increased predation by sparrowhawks and marauding magpies.

The simple fact is that in these cases, and many others like them, nature and wildlife have become convenient scapegoats: easy targets that let us neatly sidestep a less palatable reality that usually sits much closer to home.

When it comes to Irish badgers we’re doing much more than just pointing the finger. We’re indiscriminately slaughtering them.

The badger culling debate has been raging just across the water of late. Earlier this year the Welsh Assembly axed a proposed cull in Wales after reviewing the data. More recently the controversial introduction of trial badger culls in parts of England sparked massive debate, extensive media coverage and general uproar on both sides of the argument. The cull has now been postponed pending review.

Science supporting badger culling as a means of controlling bovine TB is far from conclusive. One of the chief scientist involved in the principal study for the UK Government, Lord Krebs, is unconvinced. He has urged UK Ministers to “gather together scientific experts and rethink the Government’s strategy altogether, starting from square one”.

Yet here in Ireland we’ve been killing badgers for decades in the name of tackling Bovine TB, and society has barely raised an eyebrow.

According to the Irish Wildlife Trust (IWT) the Irish badger cull has been running since 1984, and has resulted in the deaths of more than 115,000 badgers since then. Every night in Ireland some 6,000 badger snares are set by government sanctioned agents, despite the fact that badgers are supposedly protected under Irish and European legislation.

This year €70 million of Irish taxpayer’s money (another IWT statistic) — your money and mine — has been allocated to fund the disease eradication programme.

Bovine TB is a huge issue for farmers, their families and rural communities all over Ireland. It’s an issue that needs to be tackled head on… but it needs to be tackled on a sound scientific foundation. I’m happy enough for the Government to spend my tax contributions on eradicating bovine TB… but why not fund research into a viable solution for cattle. Exterminating badgers isn’t just morally reprehensible, it’s also ineffective as a control measure for the disease, and will do very little to slow its inexorable march.

Similarly the routine castigation of the sparrowhawk and the magpie for songbird decline in the Irish countryside is nonsensical, and yet it’s a myth that endures. Yes sparrowhawks kill small birds. They are perfectly adapted killing machines. It’s how they survive, grow and make more sparrowhawks. Yes magpies, and other members of the crow family are supremely versatile opportunists, and  will take the eggs and young of other birds if they get chance. But it’s dangerous to make assumptions based on occasional observation.

The science tells us in no uncertain terms that predation isn’t the culprit in the widespread declines of countryside bird populations. So what is?

Well… even the most cursory look at the trends shows a spooky correlation between declining bird numbers and changes in the way our countryside is managed. Is it too much of a stretch to accept that crashes in our countryside bird populations are inextricably linked to the specialisation and intensification of Irish agriculture? It’s certainly a more feasible hypothesis than “it’s the magpies wot dun it guv!”.

We need to stand up and be accountable for the problems we see in our countryside today, rather than seeking innocent natural scapegoats to take the rap. Only by accepting responsibility for the problems we cause can we start to put things right. Passing the buck? That only makes matters worse!

Click the link for more on how you can support the Irish Wildlife Trust’s campaign to end badger culling in Ireland.