A new humpback whale for Irish waters has been added to the Irish Whale and Dolphin Group’s (IWDG) photo-id catalogue for the species.

West Cork whale watching operator Colin Barnes of Cork Whale Watch found the lone humpback during an afternoon whale watching trip out of Reen Pier near Union Hall.  According to the company’s Facebook fan page whale watch vessel “The Holly Jo” first picked up the whale off Kedge Island, and followed it at a leisurely 4 knots along a 9km track that took it to the point of Cape Clear island. 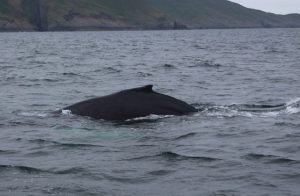 Unusually, given the length of the encounter, the whale did not fluke (raise its tail out of the water, as humpbacks often do when diving). That means there were no photographs of the diagnostic underside of the tail flukes, which show a unique pattern allowing researchers to identify individual humpback whales.

Despite that the IWDG has confirmed that based on profile images showing the dorsal fin on both sides of the animal, it is confident that this is a new humpback for Irish waters — the 29th individual identified to date.

Initially off the Kedge but Colin tracked west it over a distance of 9km up to the tip of Cape. It didn’t fluke once, but images taken by Colin are good enough to confirm this is a new HB #HBIRL29 for Irish waters, bringing the Irish HB Catalogue to 29 animals.

For more images check out this album on Facebook: