You are here: Home / Featured / Time to get wild about Ireland’s Wild Atlantic Way

Ireland isn’t high on most people’s list when it comes to wildlife destinations. That’s a shame, because as an island nation perched on the edge of the north-east Atlantic, Ireland boasts some of the best coastal and marine wildlife watching opportunities in Europe.

“Our wildlife is something I think we should be shouting about a bit more,” said Calvin Jones, Founder of the Ireland’s Wildlife website, and lead guide on their Discover Wildlife Experiences on the West Cork coast. “Most locals don’t realise how amazing the wildlife here can be, never mind overseas visitors planning their next wildlife holiday.”

Jones is hoping that Failté Ireland’s latest tourism marketing initiative, The Wild Atlantic Way, will help raise Ireland’s profile not just as a touring destination, but also as a wildlife destination in its own right. At more than 2,500 km The Wild Atlantic Way is the longest defined coastal touring route in the world. Stretching from Donegal in the north to Cork in the south it traverses Ireland’s spectacular Atlantic seaboard, and helps visitors immerse themselves in local experiences along the way.

“The Wild Atlantic Way is a brilliant initiative. Hats off to Failté Ireland, they’ve done a fantastic job of developing and marketing the concept, but I think we could do a lot more to raise Ireland’s profile as a unique and memorable international wildlife destination,” he said. “Ireland’s west coast is about much more than breathtaking scenery, surging surf and a unique Irish cultural experience. We need to put more emphasis on the ‘Wild’ part of The Wild Atlantic Way!”

A lifetime wildlife enthusiast, Jones has travelled all over the world to see wildlife, but maintains that some of his most memorable wildlife encounters have been right here in Ireland.

“We have some incredible wildlife here, especially around our coasts,” he said. “A lot of people still don’t realise we have world-class whale watching just off the West Cork coast, for example. There can be few spectacles in nature as humbling and heart-stoppingly exciting as being out on a boat surrounded by lunge-feeding fin whales.”

Minke, fin and humpback whales all visit coastal waters off Ireland’s south-west, joining common and bottlenose dolphins and the diminutive harbour porpoise, and offering European visitors a much more accessible alternative to far-flung whale-watching hotspots. But there’s much more than whales and dolphins to excite wildlife enthusiasts around Ireland’s coastline.

From some of Europe’s largest seabird colonies and spectacular migratory seabird movements; to amazing wildflowers; native mammals like red squirrels, pine martens, otters and seals; to the astonishing biodiversity of an Irish rocky shore. There are wildlife experiences to delight everyone along Ireland’s Wild Atlantic Way.

Ireland’s Wildlife is calling on state bodies, wildlife experience providers and other tourism businesses along the Wild Atlantic Way to use it as a springboard to put Ireland on the international map as a wildlife tourism destination.

“The potential is clearly here,” he said. “We just need to do more to let people know about it, and make sure we offer a fantastic experience when they arrive.”

This press release was issued by Ireland’s Wildlife in West Cork, Ireland on 24 February 2015 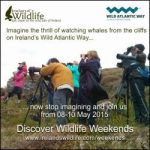 Experience the wild side of Ireland’s Wild Atlantic Way

Do you want to escape the mundane, and experience the wild side of The Wild Atlantic Way for yourself?

Join us on our Spring Discover Wildlife Weekend and discover how amazing Ireland’s wildlife can be.