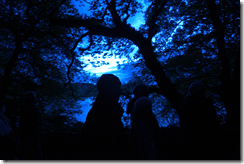 A blue-grey blush along the eastern horizon was the only hint of approaching daylight as I joined a group of game-looking individuals in the darkness. It was 4:30am, and some 35 of us had gathered at the north west corner of Ireland’s first marine nature reserve to witness one of the wonders of the natural world.

We were here for the dawn chorus. Except that nobody had told the birds to set their alarms quite so early. With the sky brightening the woods behind us and the hilly scrubland opposite were ominously devoid of birdsong.

There was wildlife though. Above our heads bats (pipistrelles I think, although without a bat detector I couldn’t be sure ) patrolled the woodland margin, deftly picking off insects in mid flight. A few minutes in and it was 1:0 to the mammals! 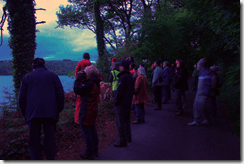 David Rees, the walk leader for this National Dawn Chorus Day event coordinated by Birdwatch Ireland’s West Cork Branch, gave a brief introduction, and before he’d finished we had our first soloist of the morning: the familiar fluting song of a blackbird. The silence broken, he was quickly joined by other performers, and before long the wooded hillside alongside the lake shore was alive with birdsong.

As we walked south west along the shore David would stop periodically, and help us isolate individual songs from the chorus of emerging voices. Song thrush, wren, robin, chiffchaff and blackcap were soon added to the tally, the more accomplished musical artists were soon accompanied by more raucous karaoke-croaks from hooded crow, rook  and grey heron. The thin wispy song of a goldcrest joined the hubub, although how David managed to pick it out, let alone point it out to the rest of us, amidst the cacophony is beyond me. Willow warbler was surprisingly late to the party – as were all three common species if tit. We only picked up coal tit, blue tit and a single great tit very late in the walk.

A whitethroat, just about discernable singing on the far bank, was probably the highlight of the 27 bird species we heard or saw… but the mammals weren’t done yet. 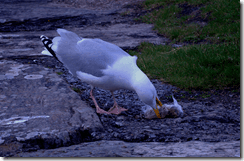 Approaching the car park on our return leg someone in the group spotted an otter. A battery of bins swung up, then, as we watched, a seal surfaced right next to the smaller animal. Both dived several times over the next ten minutes or so, but they always seemed to reappear roughly together. Where they intentionally associating with one another… somehow helping each other to hunt… or was this just a coincidence… both animals stalking the same prey? It’s hard to say, but I’ve never seen otters and seals interacting in that way before.

Back at the car park there was tea and biscuits laid on… and several of us tucked in to the sandwiches we’d brought for a post-event breakfast. Apart from one unlucky participant that it… who lost out to an opportunistic herring gull that slipped in and grabbed his food while he was ogling the nearby otter.

Hats off to Birdwatch Ireland’s West Cork branch. It was a great event, with plenty of high points – but perhaps the best part of it all was simply the experience of being outdoors so early in the morning, and enjoying the dawn of a new day in such a stunning location.