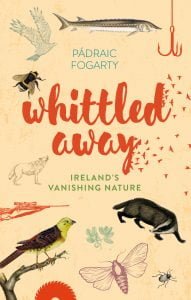 While in many ways it’s fair to say we have more today than we’ve ever had, if you’re more than about thirty years old a short walk in the Irish countryside will quickly reveal that we also have much less.

It’s an irrefutable fact that there’s simply less wildlife around today than there was just a few decades ago. Birds provide the most obvious example of this… simply because they are so, well, obvious. We see birds all the time, and dwindling numbers, or the disappearance of once familiar species from our gardens, parks or our local “patch” is something we tend to notice, and oftentimes lament.

But the rapid decline of many Irish bird species is just the tip of a very large environmental iceberg… a worrying symptom of a human-induced cancer that’s eating away at the complex tapestry of life that sustains us all. Besieged on all sides by intensive land use, development, pollution and a seemingly relentless drive to make every square inch of our countryside and surrounding seas “productive”, nature in Ireland is struggling.

Whittled Away — Ireland’s vanishing nature, by Pádraic Fogarty, charts the alarming decline of Ireland’s nature over recent decades. It highlights the chronic mismanagement of our natural heritage, our woeful conservation record and the steadfast refusal of Irish politicians to put the wider public interest above the short-term commercial goals of powerful lobby groups.

This isn’t a new problem. Indeed, the title of the book is taken from an Irish Government report from 1969 that states: “Ireland’s natural heritage is being steadily whittled away by human exploitation, pollution and other aspects of modern development. This could represent a serious loss to the nation.”

But having acknowledged the gravity of this issue almost half a century ago, a chronic lack of political will and failure to prioritise our natural heritage by successive Irish Governments has only caused the decline of our wildlife and habitats to accelerate. As Pádraic points out: in the span of a single lifetime seas brimming with vast shoals of herring, rivers bursting with salmon and bogs alive with flocks of curlew and geese have all become folk memories.

Chapter by chapter Pádraic reveals, often in stark and disturbing detail, the scale of the damage we’ve inflicted on the natural world, and the impact this devastation has had on rural and coastal communities across Ireland. He examines Ireland’s nature conservation endeavors, such as they are, and outlines how lack of foresight, poor engagement with stakeholders and lacklustre enforcement have collectively led to a damaging “them and us” standoff between conservationists and landowners. More often than not it’s the wildlife that bears the brunt of the backlash, with a misguided perception in rural Ireland that nature is the enemy, rather than our most powerful ally in resolving the challenges facing Ireland’s marginalised rural and coastal communities.

On the surface Whittled Away paints a grim picture… but surprisingly when you read the book the overriding message is one of hope and optimism. Pádraic is at pains to point out that it’s not too late to change, and the narrative is peppered with examples of communities in other parts of the world who have taken the radical approach of working alongside nature, rather than locking horns with her. The results are often astonishing, improving outcomes dramatically for people and wildlife, and all without sacrificing that vaunted “productivity” that’s so highly prized.

Engaging, informative, insightful and easy to read, Whittled Away gives an excellent overview of the status quo of Ireland’s natural heritage — just how bad things are, how we got here, and where we need to go next if we want to change things for the better.

And therein lies the crux of the issue.

My biggest concern while reading Whittled Away was that the people who are likely to buy it and read it are people like me: those already engaged with and concerned for the natural world. There’s a danger that Pádraic is, to some extent, preaching to the converted here. That said there is value in gaining a contemporary perspective, a new appreciation of the scale of the problem, and realistic ideas for how we can tackle it. Still, I can’t quite shake the feeling that those who really need to read this book probably never will, and would perhaps be impervious to its message even if they did.

It would be wonderful if we could make Whittled Away required reading for every TD who crosses the threshold of Dail Eireann. Alas we can’t, but by reading the book, gaining a clearer insight into the challenges facing Ireland’s natural heritage, and making our voices heard, perhaps together we can influence the decision makers to take the right kind of action… before it’s too late.