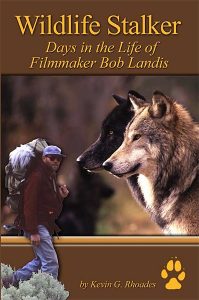 A few days after our arrival in Yellowstone our wildlife guide for that day stopped his car at a pullout and waved to an ‘elderly’ man sat in his car nearby. The man barely acknowledged our guide as he seemed engrossed on something way off in the distance. ‘That’s Bob Landis’ our guide proclaimed. I have to say the name didn’t mean much to me at the time but as our stay in Yellowstone continued we heard his name more and more. We heard other guides and regular wolf watchers talk about ‘Bob’. Bob Landis is an immensely talented, world-famous wildlife cameraman based near Yellowstone. If you have watched much wolf footage or general wildlife footage from Yellowstone you have almost certainly seen some of his work for which he has won countless awards worldwide.

Wildlife Stalker (Days in the life of filmmaker Bob Landis) by Kevin Rhoades is the story of Bob’s life, from a football playing student in Wisconsin to a dedicated wildlife cameraman in Yellowstone National Park. It charts his journey from an avid hunter, who carried a camera on his families hunting trips, to a hugely successful wildlife cameraman in Americas first national park.

Bob Landis has spent more than 40 years living just outside the park while his wife lives hundreds of miles away in another area of Montana. The book tells the story of his dedication to doing what he loves. He spends from dawn until dusk, which can be 18 hours a day in summer, inside the park searching for opportunities to film sometimes spending well over 300 days a year in the park working. He contends with intense heat in the summer and freezing cold winters to capture some of the amazing footage we see on TV.

The book takes you through some of Bob’s typical days in the park and how the footage goes from his raw footage to our screens during post production. It will also strike a chord with many aspiring photographers/filmmakers when describing Bills constant struggle to keep up with the costs involved in constantly changing and improving technologies earlier in his career. It also deals a little with the very important aspect of ethical wildlife filmmaking and how Bob’s view on this evolved.

It was refreshing to read that in 2010 Bob had no intention of ever retiring and would continue making films until he could no longer carry a camera. When we saw him on that quiet roadside in Yellowstone in 2013 he wasn’t ignoring us he was simply enthralled in his search for more wildlife to film.

This book is a very interesting read in its own right but a great insight, for budding wildlife photographers and filmmakers, into a wildlife cameraman’s daily life and the dedication needed to become a successful one. As a former filming partner Dale Johnston says about Bob, ‘there are many, many people who would like to do what Bob does-they think. But there’s nothing that prevents people from doing what Bob does, except they really don’t want to do it as badly as Bob’.

Dan Lettice is an amateur wildlife and sports photographer based in West Cork. He enjoys writing about wildlife and conservation matters and has a particular love for large mammals and marine megafauna. He can be contacted for feedback, questions or debate on [email protected]