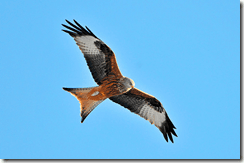 Red kites will soar over Dublin again for the first time in generations thanks to the release of 26 young birds at Newbridge Demesne earlier this week.

The release is part of a five-year publicly funded programme to reintroduce red kites to Irish skies. Now in its final year the scheme has already reintroduced XX kites to secluded parts of of County Wicklow and County Down, but the release of these 26 young birds, and an additional 14 that will be released in Fingal over the course of this year, is the first time the kites have been released so close to busy public parks and recreational areas.

“We’ve found a quiet corner to release them in,” Dr Marc Ruddock of the Golden Eagle Trust told reporters. “For the first fortnight they will be finding their wings. They will follow the food, finding earthworms and beetles and learning what to eat.”

The hope is that these birds, released between the established kite populations in Wicklow and Down, will effectively link them, allowing the birds to mix and spread outwards along the east coast and beyond.

As part of the programme the Golden Eagle Trust has worked closely with local farmers, gun clubs and land-owners to ensure the safety of the birds as they spread. These young birds will reach breeding age in 2013 – 2014, building a foundation that will ultimately lead to a viable population of truly wild red kites across the island of Ireland again.